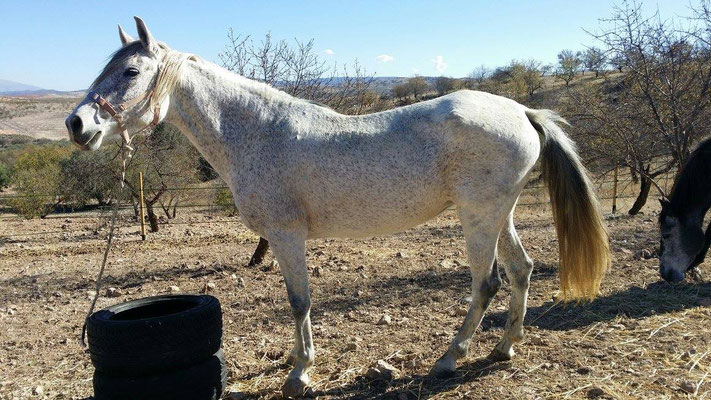 The day Selena arrived at Cortijo de Segura. We soon removed the headcollar the delivery men left on her.

Selena was living on a building site, in Malaga possibly in foal to a Spanish stallion and eating meagre rations of straw . A good friend had spotted her and thought she would be perfect for us. We agreed. She arrived in November 2016 at the time of the supermoon, so we named her Selena, after the moon goddess.

She was ridden half an hour through heavy traffic in Malaga to our friends’ place where she could wait with plenty of food until transport could be organised. A week later she arrived with us.

It soon became clear that she had been very shut down. Although she had been ridden, she refused to have a head collar on and was quite anxious around us. We have given her the time it took for the anxiety to leave and build up her trust and in people again.

Selena appeared to come into season a few times over the winter, so we assumed she wasn't in foal after all. In early June this year, we noticed that she was moving quite awkwardly behind, not lame but not right either. It seemed to correspond with her showing signs of being in season. We decided that a programme of strength and suppling work on the ground would help her. So we simply re-backed her and then went back to working on the ground.

Much to our surprise and delight on the 5th July 2017 Selena gave birth to a beautiful mule colt! Not only were we surprised that she had foaled, but a mule foal was a surprise too. Selena is a wonderful Mum, following him closely in the first week but, as he gets older and bolder, leaving him to explore his world, but always being there to come back to.

Check out our Social Media Pages: